The death of Liberal Quakerism (and the birth of something new?) 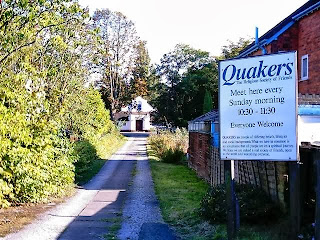 I returned from the recent Kindlers conference at Woodbrooke with the sense that Liberal Quakerism has run out of steam, but we may be in a period of transition to a new era of Quaker history, that as yet we don't have a name for.

The Quaker movement in Britain has famously been through several distinct historical eras, from the prophetic period of Early Friends, to its 'Quietist' phase in the 18th Century, followed by 19th Century Evangelical Quakerism. The era of Liberal Quakerism is usually dated from the Manchester Conference of 1895, and has remained the dominant paradigm throughout the 20th and early 21st centuries. The principles of Liberal Quakerism were formulated by writers such as John Wilhelm Rowntree and Rufus Jones, offering a powerful reinterpretation of traditional Quaker spirituality that spoke to the contemporary condition. These included the primacy of experience over religious belief, an openness to 'new light' from other faiths and traditions, the acceptance of 'continuing revelation' and an engagement with contemporary science and society.

Since the early 20th Century, Liberal Quakerism has had a dramatic impact in many fields of social action, including war resistance, famine relief, social housing, the peace and environmental movements, feminism and LGBT equality (including our recent commitment to equal marriage). The continuing appeal of Liberal Quakerism is eloquently expressed by the Quaker Meeting House sign, which is quoted by Gerald Hewitson in his Swarthmore Lecture:

'Quakers are people of different beliefs, lifestyles and social backgrounds. What we have in common is an acceptance that all people are on a spiritual journey. We hope that we are indeed a real society of Friends, open to the world and welcoming everyone.'

For many Friends today, especially those who have been hurt or excluded by traditional churches, this is the version of Quakerism that they were attracted to and the only one they are comfortable with. For them, the Quaker Meeting is primarily a 'safe space' - a place to be themselves, where they will be accepted for who they are, without expectations or demands. There is a liberating acceptance of differences in lifestyle and sexuality, and no oppressive or patronising 'leaders' imposing their own rulings on acceptable belief and behaviour.

However, over recent decades Liberal Quakerism has unmistakeably declined in numbers, and in spiritual coherence and vitality. Although many Friends are very active in a huge range of social action, we no longer have a shared language with which to communicate our spiritual experience, or a shared understanding of core Quaker practices such as Meeting for Worship, testimony or discernment. We have retreated from sharing our spiritual experience with each other or with the wider society. Consequently we have shrunk to a group of predominantly White, middle class retired people, while complacently assuring ourselves that 'people will find us when they are ready', without the need for any action on our part.

We have cultivated a marked hostility to spiritual teaching, insisting that 'Quakerism is caught not taught', and as a result many Friends who have been members for decades remain ignorant about traditional Quaker practices and spirituality. We have developed a hostility towards any suggestion of leadership or authority, and by failing to encourage and support each others' gifts and leadings we have deprived ourselves of direction. We have become collections of like-minded (because socially similar) individuals, rather than true communities of people who are both accountable to and responsible for each other.

We have rejected the Quaker tradition, with its embarrassingly fervent early Friends and old-fashioned religious language, and ended up with a Quakerism that is almost evacuated of religious content, in which our spiritual experience is something 'private' that we cannot share with each other. Consequently we have little to offer to people who are seeking a deeper spiritual reality beyond an accepting 'space' for their own solitary spiritual searchings.

There is considerable momentum within Britain Yearly Meeting towards an increasingly attenuated version of Liberal Quakerism, as first Christian and now 'theist' language is steadily rejected as too exclusive and old-fashioned. The current trajectory of Liberal Quakerism is towards a secular friendly society, which has replaced any spiritual content with a vague concept of Quaker 'values' that are almost indistinguishable from the background liberal middle-class culture. With nothing deeper to offer people who are genuinely seeking a path of spiritual transformation, Quakerism would no longer have any distinctive identity or any reason to exist.

Throughout our history as Quakers we have been able to transform our Society, when old forms no longer served as vehicles for the Spirit. Each period of Quakerism has seen a renewal of spiritual practice, conviction and witness; drawing from, transforming and enriching the tradition to meet contemporary needs.

Are we at such a transition moment today? There are significant signs of a counter-movement to the continued dilution and diminution of Quakerism in Britain, although there is as yet no name for it, beyond aspirational words such as 'renewal' and 'Whoosh'. We cannot legislate for what this new form of Quakerism might eventually look like, but some hints seem to be emerging from the conversations that are bubbling up across Britain Yearly Meeting, and that were evident at both the Kindlers conference and the Whoosh event last year. These characteristics are striking because of some radical departures from Liberal Quaker orthodoxy. They include:

A desire for deeper, more disciplined worship and spiritual practice. In the words of one Friend, 'how many of us really, really understand the profound depths of this experience, how many of us spend years not ever understanding... yet not daring to say. Is my Friend who reads all through Meeting gaining and contributing to the essential heart of our Tradition?.. does it matter? Yes.'
Many Friends have adopted the Quaker meditation practice of 'Experiment with Light'. Some Meetings are experimenting with forms of semi-programmed and extended Meetings for Worship, or with spiritual friendships, silent retreats, journalling, or other spiritual disciplines beyond an hour on Sunday mornings.

Recognition of the need for leadership that empowers others, and that supports and encourages the development of everyone's ministry. This understanding of leadership includes a renewed attention to the value of eldership, spiritual accompaniment, travelling ministry and spiritual teaching. As one Friend put it, 'there is nothing to be gained by stepping back and giving people space when they are in reality desperate to know more, to experience and understand more. What are we afraid of?'

A willingness to work towards a shared understanding of the Quaker Way, and a new clarity of language to communicate the experience of spiritual reality, God, worship and prayer. As one Friend at the Kindlers conference said, 'at each stage in the Quaker past Friends have been clear about these things; we need to become clear about them too, knowing that our clarity may not be their clarity'. As another put it, 'it is not enough to flippantly talk of discernment, of 'gathered' meeting... what does it all really mean? How can we start to arrive together through our own understanding to the real true authentic meaning of these things?'
This shared language will not be imposed by any group, but may emerge through a process of 'threshing' throughout Britain Yearly Meeting. A pointer to one direction that such a language might take is Rex Ambler's approach in his new book The Quaker Way – a rediscovery.

Deliberately reaching out to the wider society with a confident Quaker message and invitation. Since the spread of Quaker Quest around the country, initially resisted by many Friends as 'proselytising', there has been a growing enthusiasm for Quaker outreach, including other initiatives such as Quaker Week. This is often accompanied by a conscious intention to create more diverse Quaker communities – socially, ethnically and generationally.

A re-engagement with Quaker tradition. There is a growing enthusiasm for the spirituality of early Friends, reflected in recent Swarthmore Lectures and the popularity of Experiment with Light. In the foundational insights of the first period of Quakerism, many Friends are rediscovering the passion and authenticity of Quaker spirituality. Far from being embarrassed or put-off by the uncompromising vision and message of 17th Century Friends, many of us are being drawn to find ways of experiencing it for ourselves.

A willingness to overhaul Quaker structures and bureaucracy to serve the spiritual practice of the community. Some Meetings, overburdened and exhausted by the pressure to fill nominations for Local, Area and national committees, have laid down all of their roles while they re-examine their real priorities from scratch. Longer term, a renewed focus on the spiritual priorities of the community seems likely to require a drastic slimming down of Quaker structures, and a reduction and decentralisation of our centrally managed work.

These possible characteristics of an emerging new form of Quakerism are of course speculative, based on conversations with an unrepresentative minority of Friends. I have also spoken to experienced Friends, who are sympathetic to the critique of Liberal Quakerism above, but sceptical about the prospects for a resurgence of British Quakerism. No doubt I will also have offended some readers by my rather harsh assessment of Liberal Quakerism. What is your judgement of the state of Quakers in Britain, and of our prospects for the future? Do you recognise any of the characteristics of an emerging 'new' Quakerism in your Meeting? And what have I missed?
Posted by Craig Barnett