The name of God 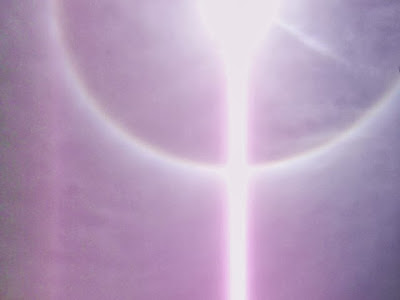 The name of God can be used to freeze our wonder, to make a comforting and useful idol, or it can be the opposite: a name that opens into continuing mystery.

(Thomas Moore, The Soul of Religion)

We all know God the idol; all-seeing, omnipotent, angry and male. For some, wounded by authoritarian religious upbringings or in flight from evangelical burnout, perhaps this is the only meaning the word ‘God’ can have for them, and in that case they may do well to leave it behind.

Some of us, fortunate enough to have avoided the crushing of our religious imagination by fundamentalism, have come to understand God as a 'name that opens into continuing mystery'.

The Quaker Way is part of a current of religious mysticism that has always acknowledged the limits of language to describe reality. Throughout history, people of all religions and cultures have experienced God not as a supernatural being 'out there', but as an indwelling presence, an inward guide, or a source of inner healing and transformation. This mystical understanding is not marginal to traditional religion. It is shared by influential figures such as Rumi in Islam, Gandhi in Hinduism, and Christians such as Julian of Norwich, Simone Weil, Thomas Merton and countless others.

For many Quakers today, this mystical understanding of God has been forgotten, and 'God language' is identified with the most conservative and simplistic Christian teaching. Even the idea of 'believing in' the existence of God makes the concept of God into an intellectual proposition rather than an experiential reality. Once we start discussing whether we believe in some 'thing' out there called God, we have lost sight of the point of the word, which is not to name some hypothetical being, but to point towards an experience of reality that cannot be fully captured in words.

It is difficult to speak about God these days, because people immediately ask you if a God exists. This means that the symbol of God is no longer working. Instead of pointing beyond itself to an ineffable reality, the humanly conceived construct that we call 'God' has become the end of the story.

(Karen Armstrong, The Case for God)

The concepts of spiritual reality that people find helpful or intellectually convincing will vary from person to person, depending on our differing experiences and tendencies of thought. These differences reflect alternative perspectives on the same ultimately nameless reality. Framing these differences in terms of 'theism' versus 'nontheism' is irrelevant and unhelpful. It is unimportant whether someone describes themselves as a 'theist' or 'nontheist', because these are matters of intellectual belief, or 'notions'. The Quaker Way is not grounded in beliefs, which have no power to help or to change us. It is a matter of practice; looking deeply and attentively at the reality of our experience and allowing ourselves to be guided and transformed by what we discover there. The only genuinely important question from the point of view of this practice is whether we can experience a spiritual reality that is independent of our own desires and decisions.

There are many Friends who find the concept of an omnipotent personal God intellectually impossible or unhelpful, but who know themselves to be profoundly held by a deeper reality, or part of a greater interconnected Universe, which they might call by a range of names or have no words for at all. There are other Friends who argue that there is no such thing as any spiritual dimension of reality; only human values and concepts. For them, religious language can have at most only a metaphorical meaning as a way of talking about our own personal values. The principal spokesperson for this view is David Boulton, who writes of his own experience:

I have never, since I ceased to be a child in the mid 1950s, been persuaded of the reality of supernatural forces or dimensions, even when they are smuggled in under such euphemisms as “transcendence”, “the numinous”, “the divine”, or “the mystical”. I can no more entertain the notion of gods and devils, angels and demons, disembodied ghoulies and ghosties, or holy and unholy spirits, than I can believe in the magic of Harry Potter or the mystic powers of Gandalf the Grey…

I fully understand that belief in a transcendent realm and a transcendent god as the guarantors of meaning and purpose have inspired millions. They do not inspire me. Instead, they seem to me illusions we can well do without, and I find myself raging at the toxic effects of literal, uncritical belief in divine guidance, divine purpose, divine reward and punishment.

(David Boulton - 'Quaker Identity and the Heart of our Faith')

Friends who describe themselves as ‘nontheist’ in this thorough-going materialist sense, reject the possibility of experiencing a spiritual reality that is independent of human choices and values. Instead, according to David Boulton, 'God becomes for us the imagined symbol of the human values that we recognise as making an ultimate claim upon us.' For them, the Religious Society of Friends is a diverse community based on shared values which is (or should be) equally accepting of every form of belief or theological opinion. This is the point of view expressed by a reader of this blog in a comment on last month’s post:

Nontheist Friends have difficulties talking about discernment as "finding the will of God". Can we phrase it in a way which is acceptable to Christians, Nontheists, and all the other theological positions to be found within our Yearly Meeting?

This request, and the similar ones being heard on all sides within Britain Yearly Meeting at the moment, has a straightforward appeal as a claim to fairness. Given that there are now many Friends who don't believe in God, surely it is time to drop the use of 'God language' that is only meaningful to 'theists', and substitute some other word that is more universally acceptable?

Those nontheist Friends who argue in this way are like people who have joined a mountaineering club from a love of the history of mountaineering, the social gatherings and interesting equipment, but who are not willing to go climbing themselves. While accepting that some 'mountainists' still claim to enjoy climbing, these 'non-mountainist' members politely request that the club cease to describe its principal activity as mountaineering, and instead adopt more universally acceptable language.

The purpose of a mountaineering club is to climb mountains. The purpose of the Religious Society of Friends is to follow the guidance of the Spirit. All of us have inherited Quakerism as a living tradition of religious practice. Whatever good it has achieved in the past is a result of Friends' willingness to be led and shaped by the Inward Light. In becoming members we have accepted a responsibility to be faithful to the guidance of the Spirit, and so to preserve Quakerism as a living Way for others. This is not a matter of words. It doesn't matter whether we call that source of inward guidance God, the Light or anything else. What does matter is that we are willing to be guided by a spiritual reality that is not dependent on our own choices and values.

The existence of this spiritual reality is not primarily a matter of belief, but of experience; either we know it by our own experience or we don't. Clearly many contemporary Quakers do not know it by experience and therefore have no adequate reason to believe in it. In response to this, rather than changing the purpose of the Religious Society of Friends, we might do better to encourage each other to make use of the spiritual disciplines that Quakers have practised to experience spiritual reality for ourselves. Once we encounter it we will know for ourselves that it doesn’t matter what words we use, because any concepts can only point towards the experience of this reality, without defining or describing it:

Reality is finally mysterious. Our little word 'God' tries to name that mystery... It points but it does not describe. It offers no concepts or images that enable us to grasp the reality in our minds. It can only invite us to look and to see for ourselves.

I am keen to hear readers' views on the points made in this post. Is it a fair reflection of the views of those who describe themselves as ‘nontheists’ (in any sense)? Is it possible to reclaim the word 'God' from fundamentalism, or do we need to substitute a less misunderstood word, such as 'Light', 'Spirit' or something else?
Posted by Craig Barnett